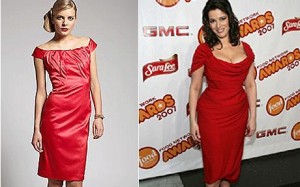 Do you watch a lot of TV? I really don’t watch much, but when I do, I often come across cooking shows with some of the most popular celebrity chefs out there. That’s how I came to know about Nigella Lawson.

More than being a genius in the kitchen – as critics and fans say – Nigella has also gained fame and renown for being one of the most attractive celebrity chefs. Me thinks that if she were to go for another career, Ms. Lawson might very well go into fashion.

I don’t know if you have heard about it – or seen it – but Nigella has been sporting a very fashionable look lately. Dubbed the “hourglass look,” the chef’s chosen style is H-O-T. It is not really new. The hourglass look has been sported by many before her, but somehow, she has made this look her own.

Nigella has Vivienne Westwood to thank for this new look, in part at least. She started her transformation from the kitchen’s Wonder Woman to a flaming bombshell with some really well chosen pieces from Westwood’s Anglomania collection. She did not stop there, though. Soon, she picked up a piece from Katya Wildman, and this is what did the trick, I think.

This dress has, in fact, become a best seller for The Dispensary, a Notting Hill boutique. I am pretty sure that you want this dress for yourself as well. If you want to take a look, visit the web site of The Dispensary. Just be ready to shell out ₤160 to ₤180.