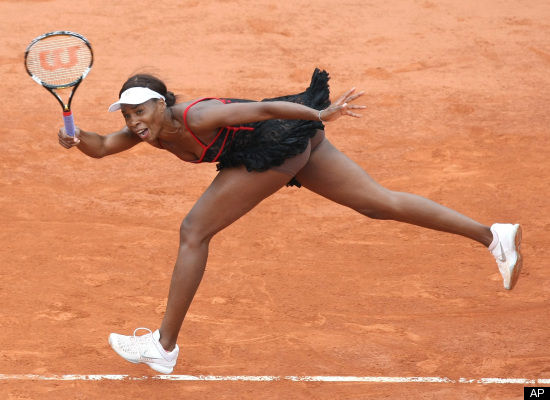 Venus Williams sure made a lot of eyebrows raise with the tennis outfit she already wore two times (last Sunday and Wednesday) during the French Open. The black lace corset with red trimmings did not look at all like it belonged on the court. Seriously, I’m all for fashion and looking sexy when you want to but I have to agree that her outfit just looks inappropriate. When I watch her tennis matches I want to see her play and not have to wonder what in the world she was thinking!

Apparently though what she was thinking is that lace should be a staple in tennis fashion. According to Venus, “Lace has never been done before in tennis, and I’ve been wanting to do it for a long time.” Ok. I have nothing against lace but don’t she shouldn’t be surprised if they rip as she dives for the ball. Furthermore it wasn’t just that it was lace but it was a corset and looking at her picture it is no wonder she won the match because Arantxa Parra Santonja would have been totally distracted by what looked like her butt. As for that all Venus actually did decide to go for that effect. In her press conference she also said, “”It’s really all about the illusion. What’s the point of wearing lace when there’s just black under? The illusion of just having bare skin is definitely, for me, a lot more beautiful.”

Oh Venus. You are indeed beautiful like the goddess that shares your name and I can only wish my muscles were as toned as yours, but please you can be beautiful, fashionable and appropriate at the same time. Let’s just hope for her competitions’ sake that she dresses better next time. At least we know that as a strategy, it works!