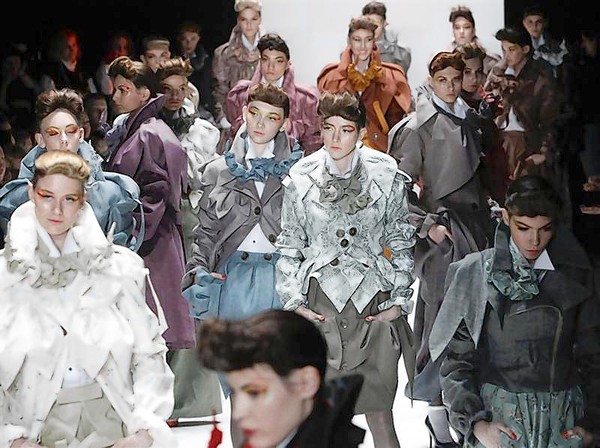 Fashion for me is always a bright spot that can make me feel a tad bit (or a lot) better even on the gloomiest of days. Well it seems that gloomy is just the right word to describe the atmosphere in Moscow these days as attested not only by what we see on the headlines, but even in what otherwise flamboyant designers decided to put out for this week’s Fashion Week.

The Russian Fashion Week, which we can usually count on to bring exciting and colourful designs instead reflected the mood in Moscow with Autumn/Winter 2012/2013 collections featured by the best designers in the country all echoing a sombre, even austere feel.

Dark and drab colors dominated the runway with blacks, grays, browns, all partnered with the ever neutral white and pale pops of color seen in most designers’ lines. This left color palette complemented simple lines and classic skirts, trousers, and jackets. Although some pieces did pop out with their interesting silhouettes, the colour and the lack of accessories on the models, as well as their pale make up made for an overall severe look.

This is not to say that the creations seen in Russian Fashion Week were boring, contrary to that. In fact, had not the designers’ inspiration been rooted on the troubled political waters of the country, I would have called the collections refreshing. Instead, it would be more apt to call their collections relevant. And who said that relevant means boring? The Russian Fashion Week collections are proof that relevant can still be visually riveting.