And the Oscar goes to…

Again we don’ care one bit. What we do care about is who showed up everyone else on the red carpet in this year’s Oscars, which everyone (including us) seem to agree is Gwyneth Paltrow. 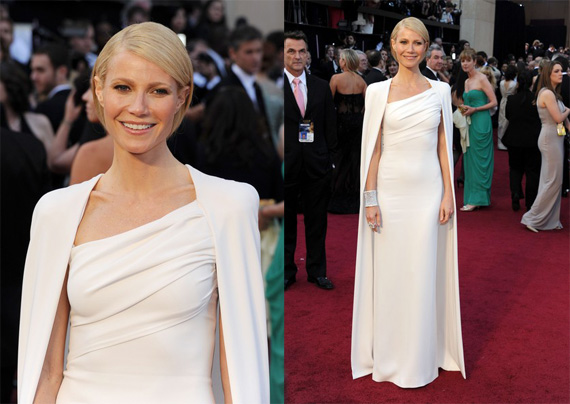 Who would have thought that a full-length built-in white cape on a floor length white gown would look sensational. If you would have described it to me before seeing Gwyneth Paltrow don the dress, I would have automatically pegged it for tacky and super-heroish. When Gwyneth emerged sporting Tom Ford’s unique ensemble though, there was nothing super heroish about it at all, and was plain super. As Perez Hilton put it, “”If you look up best dressed in the dictionary you will see this picture of Gwyneth Paltrow. Her white Tom Ford gown with a built in cape is everything! This is going to be a look that goes down in Oscar red carpet history!”

Move over over-sized bows, ugly snake skins, and other fashion risks that just didn’t pay off, because this white-caped wonder is one unique risky dress that sure paid off.

If Gwyneth’s look inspired you to sport the same for some party though, I highly advice against it because for one, I doubt that you’ll be able to afford the Tom Ford dress. Secondly, unless you’ve got the goods to back it up and the confidence as well, I doubt you can pull it off just like Gwyneth did. Besides, what made it special is its unique creativity and being a copy cat is the exact opposite of that.

Image via Rantings of a Creole Princess